The weather this year was quite kind to us and despite some worrying moments the rain held off until the end. Our nominated charity was The Multiple Scelrosis Centre in Halton. The day started with a procession by our local children in fancy dress organised by Kate Laughton. They looked wonderful in their splendid costumes, which were judged by Allyson from Speen stores. The winner was Olivia Warr who 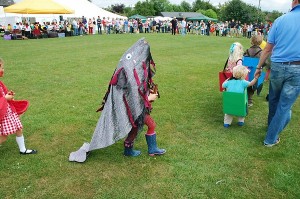 dressed as a fish, with the runner up being William, Emily and Ruben O’Brian who came as a train. They looked wonderful. The marquee gave shelter to various groups. The WI, who supplied us with delicious cakes and refreshments all afternoon, the ladies who displayed their expert arts and crafts skills and, new this year, to a model steam engine display which fascinated all the would be train drivers among us. The local fire brigade turned up. Not with sirens blaring but to show the emergency equipment they have and answer questions. Many children could be seen staring wide eyed at the gleaming engine. Later we were entertained by the West Wycombe brass band who performed a rousing selection of music which added greatly to the general atmosphere. The children from Speen School gave a flourishing display of country dancing in the arena. They had been expertly choreographed by Denise Nayna and performed magnificently. The Punch and Judy and magic shows kept the younger children enthralled and their excited cries could be heard across the field.

Our main event for the afternoon was a display by the ‘Hearing Dogs for the Deaf’ society who gave a wonderful display of how these amazing animals are trained to assist those who have little or no hearing. We were shown how a person is woken when their alarm clock sounds or alerted when the telephone or door bell rings. Not only are dogs taken as puppies but the society also takes some that have to be re-homed for whatever reason. 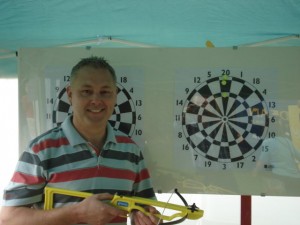 ook, bake, plant, sew and generally prepare the produce that was so eagerly bought by everyone who visited the stalls. We are also extremely grateful to the band of sterling helpers who manned the side-shows all afternoon and gave enjoyment to young and old alike. On the crossbow stall Andy Thompson achieved the amazing score of 120 with 3 bolts in a perfect straight line thus winning the prize for the highest score of the day.

Another highlight of the afternoon was watching Paul Rogerson, our local councillor, in the stocks being

bombarded with wet sponges. If only we could have persuaded some of our senior politicians to come and raise money for us !!Planning has already started for our fete in 2010. We are looking for suggestions for the nominated charity. If you have an idea of who you would like it to be please let us know by contacting any committee member or our secretary Nicki Pitt . We would also welcome any other suggestions you might have regarding the fete. Please share your thoughts with us.

The magnificent £250 first prize in our Grand Draw was won by Megan Bugmore and the second prize of Free Ice Cream for a year went to Barbara Collett. The runner up prizes were won by the following people:-

Congratulations to all the winners and a big thank you to all our sponsors and everyone who took part. We hope we see you again next year.